This building was located at the intersection of Elm Street and Federal Road, just before the Kezar Falls Bridge.  It was built by Walter Newbegin in 1883.  He manufactured and sold cigars, fruit and confectionary and ran the Post Office here about 1896.   Pierces Restaurant was in this building in 1950 before the building was taken down.  It was replaced with a ranch style building for Estabrook’s Restaurant that later became an Antique Shop.  It too was removed when the new bridge was built in 2001.

Posted by Patricia Turner at 8:46 AM No comments:

Apparently there was some sort of celebration going on when this picture was taken in Kezar Falls Village. It is the intersection of Elm Street, Federal Road and the Ossipee River bridge and shows the large impressive home of Jeremiah and Ellen (Dixon) Bullock built about 1827. Their daughter, Margaret, then lived here for several years.  She sold it to Dr. Arlquist of Falmouth who later sold it to the Garners. The house burned leaving a vacant lot for many years.  To the far left is the corner of the Stanley Block and across the street is the Norton Hardware store.  Today the Parsonsfield Post Office, built in the 1960’s, is located at this site.
Posted by Patricia Turner at 10:49 AM No comments:

The Middle Road School and the Union Church.... 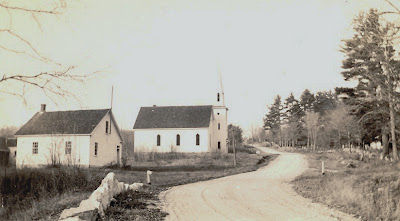 On the left is the Middle Road School – District. No. 6 - facing Merrill Hill Road.  The Union Church is just beyond and the Town House is just out of the picture on the right.  The school existed here from about 1872 until 1939. The Congregational Church built a second church here in 1830.  The Union Church Society purchased it in 1899 intending to use the material from that church to build a new one.  Regular Union Church services ceased in 1920.  An annual service is held here each year in late summer.
Posted by Patricia Turner at 6:03 AM No comments: