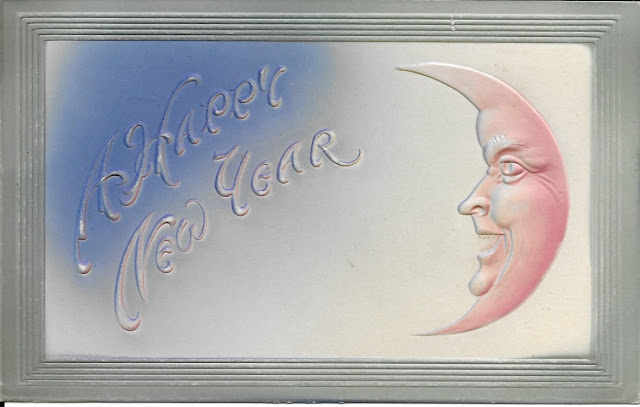 * New Year’s Eve is the largest one-day party event of the year.

* Because the earth is divided into time zones, the first ones to usher in the new year are just west of the International Date Line in the middle of the Pacific Ocean.

* “Auld Lang Syne” is the traditional song sung at the stroke of midnight on January 1. The song, which translates as “old long since” and means “times gone by”, was written by Scottish poet and lyricist Robert Burns in 1788.

* The Tournament of Roses – Rose Bowl Parade in Pasadena, California began in 1886.

* Dropping of the ball at midnight in Times Square, New York City began in 1907.

Today New Year’s greetings are usually included with our annual Christmas or Holiday greeting cards.  But there was a time when New Year’s cards were more commonly sent to friends and relatives.  They ranged from whimsical to sentimental.  Here are a few examples. 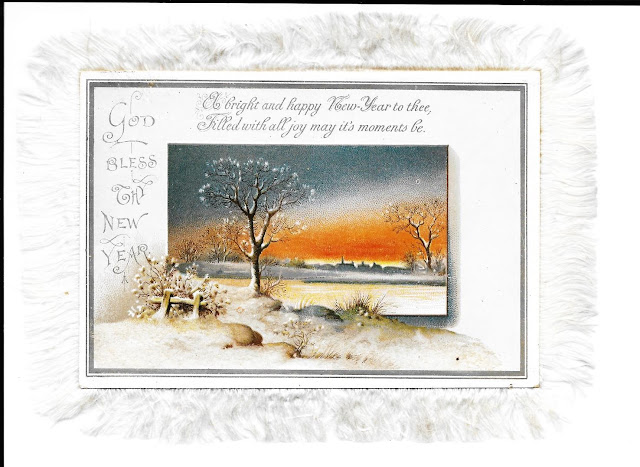 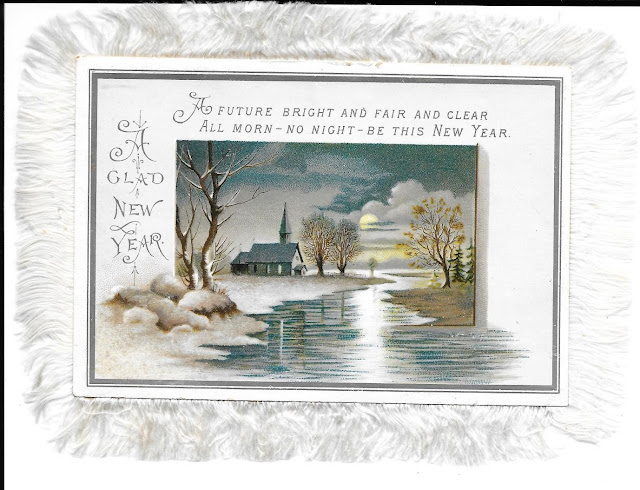 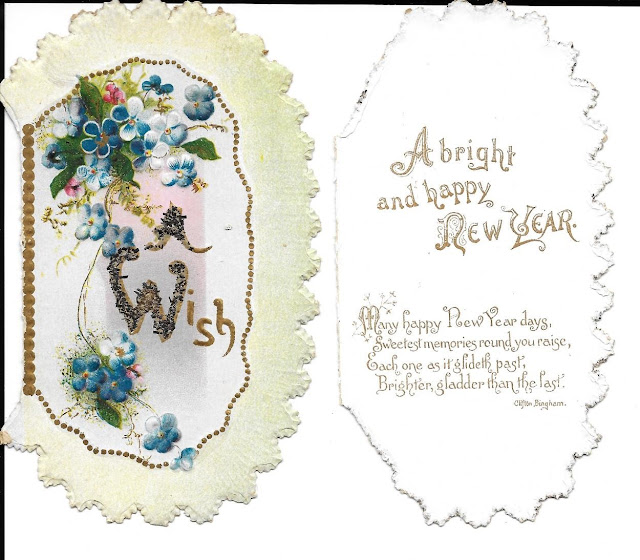 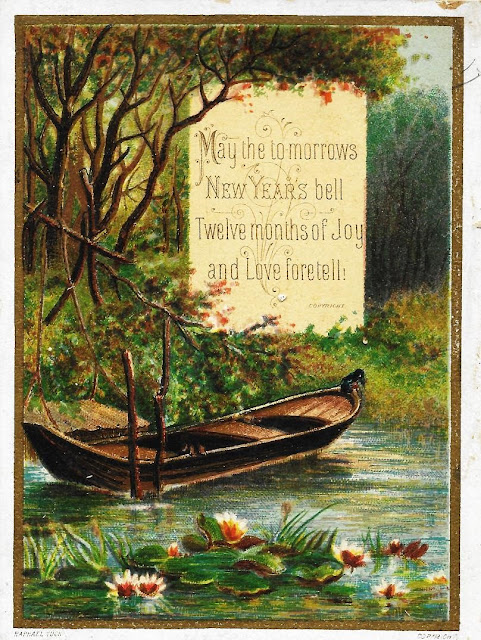 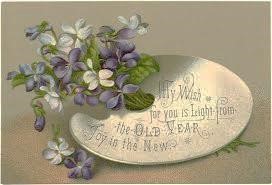 
A women’s quartet from Kezar Falls called the “Bel Canto Singers” made an impression in the music world here in 1936/37 performing in concerts in the surrounding area, Portland, Rockland, ME, and as far away as  St. Johnsbury, VT.  Evidence of their popularity is expressed in press releases.

All four women had been musically trained and were studying at the time under Donald Gagne of Boston and St. Johnsbury, VT.  Flora, Margaret and Doris had also been members of the Rossini Club of Portland.  Flora Carpenter went on to be Supervisor of Music in the public schools of Parsonsfield and Porter as well as other surrounding towns and is well remembered by the children who attended schools here for many years.  (We were unable to determine when they stopped performing formally.)

The Portland Rossini Club is still a prestigious music club.  It was originally founded in 1869 exclusively for women performers.  Male members have been accepted since the late 1980’s.  It currently has seven concerts per year.  Even 145 years later, the club only accepts the best, holding small auditions throughout the year at the Cathedral of St. Luke.  To be eligible as a “performing member” one must audition. Nonperforming members are accepted as Associate Members.  They are individuals who believe in the club’s mission of providing live music to the public and encourage offering music scholarships to Maine students.

The Bel Canto Singers of Kezar Falls, a quartet which was well received at an earlier appearance before the Portland Rossini Club, presented an interesting concert at the State Street Parish House Monday evening.  An invited audience, including many of the musical set, showed appreciation of the excellent program, rendered with much artistry.
Members of the quartet are Mrs. Flora R. Carpenter, 1st Soprano; Mrs. Iva R. Cutting, 2nd soprano; Mrs. Margaret L. Chellis, 1st alto, and Mrs. Doris V. Lord, 2nd alto.  Mrs. Carpenter is a non-resident member of the Portland Rossini Club.
The voices blended harmoniously and the singers showed interpretive taste and excellent training.  Bernice R. Huber was the pianist and proved a capable accompanist.  Solos, duet numbers and quartet numbers were on the program.  Ushers for the concert were Donald Dow, Donald Anderson, Louis Stanley and Frank Lord of Kezar Falls.
------

PORTLAND EVENING NEWS:
A group of guest singers lent a grateful note to the program in a series of songs sung in four part harmony….. The voices were pleasant to the ear, and the songs well chosen.

PORTLAND PRESS HERALD:
The Bel Canto Singers show themselves most versatile interpreting the songs in a musicianly manner.  The voices, very different in quality when heard in solo, blended pleasingly.  That the entire program was sung without notes added much to its enjoyment.

BRIDGTON NEWS
The excellency of their voices and wide variety of selections provided a program keenly enjoyed.

ST. JOHNSBURY CALEDONIAN
The quartet of Portland who were heard last June in the Gagne recital, accepted an oft-repeated invitation to return to St. Johnsbury, and gave a concert which merited the hearty applause accorded them.

ROCKLAND COURIER GAZETTE
The Ladies’ quartet …… of Kezar Falls was “a thing of beauty and joy forever,” their voices blending as the colors of a rainbow, with noticeable clear enunciation and group phrasing. 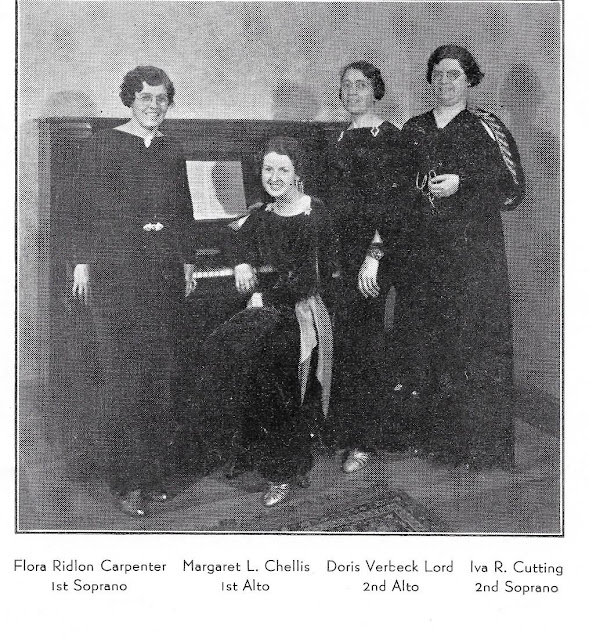 Posted by Patricia Turner at 10:22 AM No comments: