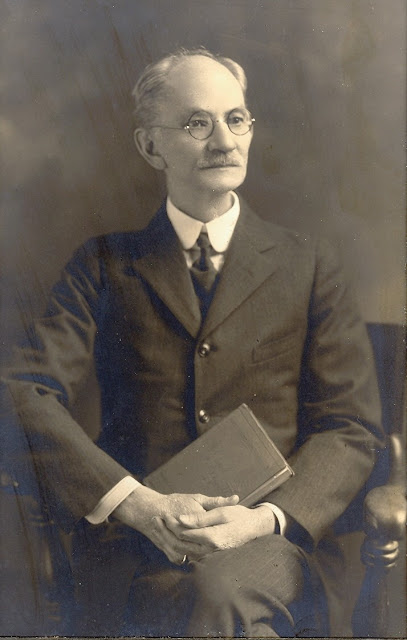 From 1883 to 1887 Kezar Falls had the good fortune to have a newspaper published in the village which documented that period of remarkable growth and development of the local area and Kezar Falls in particular. Mr. Robert Fulton Wormwood, its publisher and editor, wrote detailed and interesting accounts of what was happening and his editorials championed many causes for the betterment of the residents.  His interest in Kezar Falls continued long after he moved away.

Robert Fulton Wormwood was born June 15, 1858, son of Darius and Abbie Ellen (Wales) Wormwood and attended Porter schools.  His family had a farm in the Porterfield area, but by 1858 they owned the house on Bridge Street that later became Goodwin’s Store and then Kezar Falls Market (closed in 2018).

Robert had a long and successful career in the field of journalism starting at the age of 14 when he apprenticed himself to a German printer in Boston to learn the trade.   After working several years at newspaper offices in the Boston area he returned to Maine and in 1884 married his first wife, Miss Anne M. Stacy, daughter of Jordan and Lydia Stacy of Porter.  They had two children, Mrs. Bertha M. (Wormwood) Doe of Kezar Falls and Mrs. Florence (Wormwood) Garland of No. Parsonsfield.  Annie died in 1893.  He married his second wife, Mrs. Anna Bullock of Biddeford in 1904.


After publishing the “Oxford County Record” in Kezar Falls for five years, he moved the newspaper to Fryeburg where it continued until 1892.  Then, because of ill health, he sold the business to the “Norway Advertiser”.


In 1892 Mr. Wormwood joined the editorial staff of the “Portland Evening Express”.  After eight years he worked for a short time on the staff of the “Lewiston Evening Courier”.  He returned to Portland as editor of the “Sunday Times” continuing until March 1901.  He then became the editor of the “Biddeford Journal”, a position he held until retirement, May 10, 1941.


Robert Fulton Wormwood died at the age of 83 on January 30, 1942 at the home of his daughter, Mrs. Daniel Garland in North Parsonsfield.  He was well known in the newspaper field of New England for 59 years – sometimes known as “Fult” but also as “Deak” by his newspaper friends.


Harry Donald Lord was born in the Porter section of Kezar Falls in March 8, 1882 to John F. and Mary (MacDonald) Lord.   He acquired his education at the schools of Kezar Falls, graduated from Bridgton Academy, and attended Bates College.  He married Hazel Corinne Hannaford of Cape Elizabeth in 1905.  They had a son Harry Donald, Jr and a daughter, Connie. 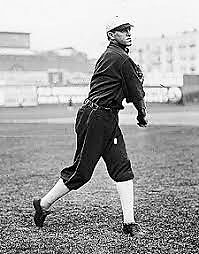 George French was a friend who knew him well and wrote at length about him in Dr. Teg’s “History of Porter”.  He wrote that Harry was a baseball man instinctively.  He was a typical “bred-in-the-bone” baseball player – fast, heady, scrappy, fearless, and a good hitter.  He was well known throughout the professional baseball world from 1905 until he retired in the 1920’s.”


Harry got his start playing baseball at the age of 14 here in Kezar Falls in 1896.  From then on for some 20 years Harry went up and up on the climb to baseball fame making a name for himself starting at Bridgton Academy and at Bates College. He broke into organized baseball at age 24 in 1906 with Worcester in the New England League and the next year moved up to Providence in the Eastern League.  On September 25, 1907 he began playing professionally for the Boston Americans (Boston Red Sox) continuing until 1910.  After breaking his finger, Lord was traded to the Chicago White Sox (1910 – 1914).  When he unsuccessfully squared off against the White Sox owner, Charles Comiskey, in hope of a salary raise he quickly found himself off the team.  In 1915 he signed on with the “outlaw” third major league - Federal League/Buffalo Blues that existed only 2 years.  With the demise of that league, Lord found himself blacklisted by both the American and National leagues, effectively ending his professional playing career.  He played his last major league baseball game on September 27, 1915.  He came home to New England and managed several minor league teams, ending his baseball career in 1925 at age 43.   His major league statistics were:  972 games, .278 batting average, with 1,024 hits, 506 runs, 107 doubles, 70 triples, 14 homers and 294 RBI’s. 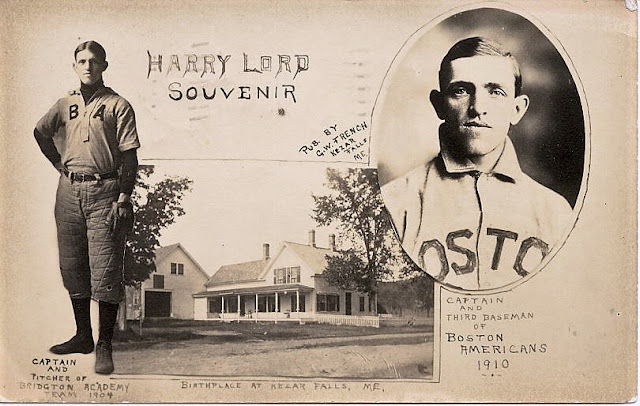 After giving up big league baseball, he settled in So. Portland, raised his family, ran a grocery store, coached and played ball locally, participated in politics, and for several years before his death conducted a coal business in Portland.  He was also an ardent hunter.  He bought the old Simeon Day place near Colcord Pond in Porter, remodeled it, and spent much time there, hunting and entertaining old friends.

He died August 9, 1948 in a Westbrook hospital after several years of ill health.  His wife died in 1974.  He and his family are buried at the Kezar Falls Burial Grounds.
Posted by Patricia Turner at 6:28 AM 2 comments: