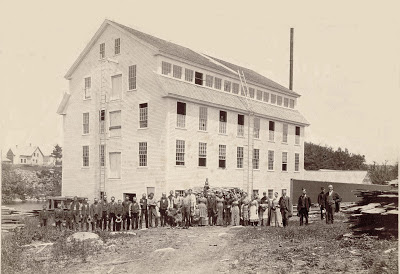 In 1880 George Towle, Elijah Fox and John Devereux saw the manufacturing possibilities on the Ossipee River and knew there was a need for employment in this area.  They built the original woolen mill building shown here and organized the Kezar Falls Woolen Manufacturing Co.  After a difficult start, Allen Garner was engaged in 1881 as an agent to superintend the setting of machinery and to run production.  He eventually owned the mill and the success of the mill was due largely to his shrewd judgment, excellent leadership and untiring efforts.  Local citizens who had made their living from farming left the farms to work here.  The mill became a critical part of the growth of the village and surrounding area.  It expanded and grew reaching its peak in the 1950’s.  It changed hands twice and continued to operate until 2000.  Today the property is owned by the Town of Parsonsfield.
Posted by Patricia Turner at 7:05 AM 2 comments: 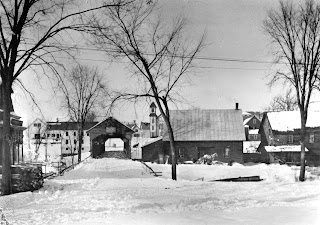 The road between Cornish and Kezar Falls, part of the Ossipee Trail, was built in 1836.  The stretch from the Cornish line to the Kezar Falls bridge was called South Main Street, (North Main Street being on the Porter side of the river).  The State built the cement road from Cornish to Kezar Falls in 1930.  This route, that ran from Portland to New Hampshire, became known as Route 25.  South Main Street is called Federal Road today.  This view shows the Newbegin Cigar Store, left, the Kezar Falls covered bridge to the Porter side of the river, the Devereux Gristmill, and Merrifield’s bobbin mill.  Albion Benton erected a saw mill near here in 1865 that John Devereux purchased about 1871.  He then built a grist mill at this site and ran both until the woolen mill was established in 1880.  J. Merrifield built his bobbin mill next to it in 1883.  (A later view of this same scene, taken in 1897, is seen in our blog heading above.)
Posted by Patricia Turner at 6:27 AM No comments: