Remembering the Suffragettes who, in 1919,
finally won the right to vote for women in Maine
and honoring some of the other remarkable women
of our towns
and the State of Maine
by telling a few of their stories. 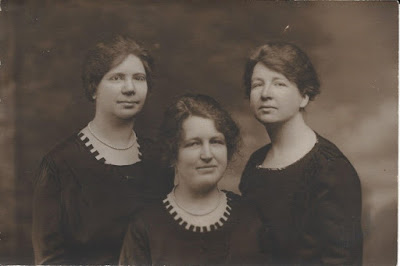 Come tour the house and view all the exhibits.
at
History House
92 Main Street in
Kezar Falls Village (Rt. 160)

Posted by Patricia Turner at 9:38 AM No comments:

One Woman, One Vote


You are invited to attend the
Parsonsfield-Porter Historical Society
meeting and free program.

To set the stage for our new exhibit “HER-STORY”, which will open June 1st, we are presenting a documentary film,

“ONE WOMAN, ONE VOTE”
that focuses on the early Suffrage Movement 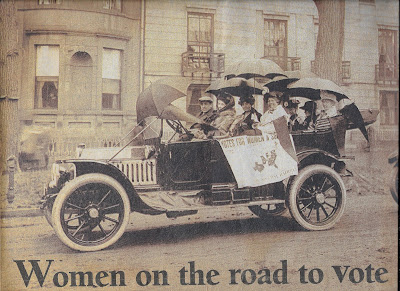 Posted by Patricia Turner at 6:34 AM No comments:

Frank Pierce Goodwin, Jr. was born in the New Settlement District of South Hiram on May 26, 1892 to Frank P. and Eliza (Bradeen ) Goodwin.  He was the youngest of three children. When his father died in 1905 Eliza moved with Frank, Jr.  to Kezar Falls and lived in an apartment over what was then the Ridlon Brother’s Store (now the Village Laundry). Frank worked at the Kezar Falls Woolen Mill and the Kezar Falls Bobbin Mill. Being a real Yankee business man with faith in his abilities, he eventually struck out for himself. His first venture was to open a roadside stand, install a gas pump and build three small overnight cabins at what became known as Indian Glen, which he later sold. At one time he operated a grocery store in Kezar Falls in the bank building. After the fire there he ran another grocery store in Cornish, later to become Coolbroth’s market. At about 1915 he purchased the John Quint Bakery on Bridge Street, Porter (Kezar Falls Village). He operated it as a bakery for a time but eventually enlarged it and established the general store - “Goodwin’s”, selling a wide range of merchandise but eventually settling on groceries. This establishment continued to operate as an important local small store under different management at times in recent years, but still owned by the family until 2018 when his grandson closed the business for good and put it up for sale.


In 1934 Mr. Goodwin purchased the Lakecroft Inn at North Sebago, changing it to Goodwin’s North Sebago Lodge and Cabins which did an extensive business catering to the general and traveling public.  It is still owned  by the family today.


Frank Goodwin started from scratch and by hard work and self sacrifice combined with rare business judgment, became owner of thriving businesses.  In his daily life, he was a businessman first and last, sincere and honest, and as such he commanded the respect of all with whom he dealt.   Yet he was of a generous nature, interested in the affairs of the town and always ready to contribute more than his share to any worthy cause.


In 1953 suffered a paraliytic stroke losing his mobility and ability to talk.  His nephews, Robert, Clarence and Norman Edgecomb managed the store, but still mentally alert  he continued to direct activities at the store through written word or sign language for several years.  He passed away on Sept. 8, 1965.  His wife followed on Dec. 29, 1968.
Posted by Patricia Turner at 12:03 PM No comments: