It use to be populated with several homesteads as well as the Emerson School House.  It ran from west to east starting at Middle Road where it intersected with Emerson Road and continued east to Merrill Hill Road.

Most, if not all of the houses, were abandoned by the mid 1930’s and the properties were bought by the Leavitt Plantation.  We have recently acquired pictures of the Tarbox homestead and Emerson School House from Carl Tarbox of Cornish, Maine.

The 1872 map indicates this property belonged to G. Tarbox.  That was George Bedell Tarbox, Carl’s great-great grandfather.  He and his wife, Adeline (Hasty) Tarbox had 13 children most of whom grew to adulthood here.  Their son Lorenzo and his wife Josephine were probably the last generation to work the farm.  Carl’s father, George D. Tarbox and his sister spent their childhood here.

The Emerson School House, District #5, was located at the intersection of Moore Mountain Road, Middle Road and Emerson Road from 1802 to 1897.  Nothing remains here today.

Posted by Patricia Turner at 7:44 AM 3 comments: 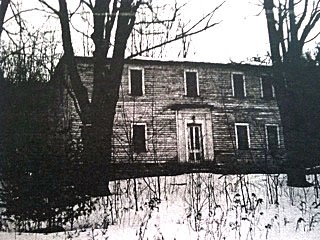 This poor dwelling was known locally in recent years as the Fred Gale House. Located on Middle Road, just east of the village, it began to collapse sometime in the 1990’s and all that remains now are the cellar hole and a few partial walls projecting up out of what was once an ell connecting the house with the barn.

Although we are not sure when the house was originally built, it was listed on both the 1858 and 1872 maps as belonging to S. L. Ricker. Samuel Leighton Ricker was the grandson of Dominicus Ricker, one of the earliest settlers of Parsonsfield. Samuel and his wife, Elizabeth, lived there until 1872 when they sold the property to Elijah Whiting.

The property changed hands several times over the years until it came into Fred Gale’s hands. Fred was the last owner to actually live in the house.  Born in 1884, Fred grew up in New Hampshire. He met Kathryn (Katie) Lord and married her in 1904. They lived in New Hampshire until her parents died and then moved to Parsonsfield to live in what had been her parents home.

Katie’s parents, Clara (Moulton) Lord and John B. Lord both died in 1927. The Moulton family was well-entrenched in the Middle Road Village community. Katie’s grandfather was William E. Moulton who lived up the road in a house that is no longer standing. Her mother, Clara, had several brothers and sisters living in the area. Clara’s brother, Alonzo, fought in the Civil War. Clara became known as the town’s first librarian. She wrote for some of the local papers and she became a strong (but unsuccessful) advocate for the local post office that was at the corner of Middle Road and Merrill Hill Road. Katie’s father, John B. Lord, was well-respected in town and served on various committees. He was road commissioner, school agent, and active with the nearby Union Church. Clara’s unmarried sister, Hattie, lived with them in the house. When Katie and Fred moved in, Hattie remained to live with them.

The couple had 3 children: Parkman, Alice and Margaret Gale.  Katie died in 1934.  Fred suffered a serious accident, breaking his neck when he fell off of a hay wagon. He was essentially paralyzed for the rest of his life.  Edith Chapman, who lost her husband in 1933, came to care for him and they married in 1937.  Fred, an invalid living in a nursing home at the end of his life, could not pay the taxes on the property and the town took ownership.

Posted by Patricia Turner at 9:00 AM No comments: