In the midst of this current presidential election year most people take the right to vote for granted when in fact women have been allowed to vote for less than 100 years.  It was not until June 4, 1919 when Congress passed and then ratified, on August 18, 1920, the 19th amendment to the Constitution which guaranteed all American women the right to vote.
On Election Day in 1920, millions of American women exercised their right to vote for the first time.  It took activists and reformers nearly 100 years to win that right and the campaign was not easy. Disagreements over strategy threatened to cripple the movement more than once. When the amendment was finally ratified it declared for the first time that women, like men, deserve all the rights and responsibilities of citizenship.

It appears from these pictures that the women of Kezar Falls were active in the suffrage movement.  Isn’t it curious that they all seem to be dressed alike in bonnets and with pantaloons  showing below their skirts. And it looks like they were disguising their faces too.  Perhaps these pictures were of a later reenactment?  If anyone knows more about these pictures, please let us know. 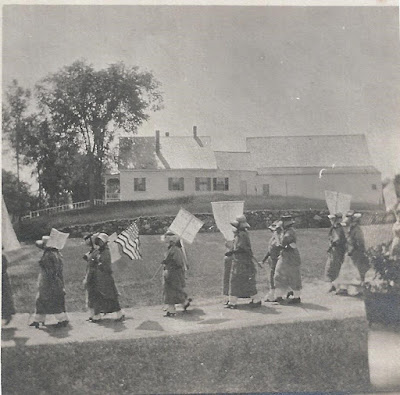 The house in the background in the second photograph looks like the former Thelma (Weeks) Maloon house (later Betsy Jarvis’ home) on School Street which would be out of the picture on the left. Perhaps the women are walking down the driveway of the house next door as there is no road in this location.

The PPHS needs your vote too!  Our first meeting is Saturday April 30, 2016 at 1:00 pm at the Porter Town Hall.  The new slate of officers need to be voted on and a quorum is needed.  Please make every effort to attend.

Posted by Patricia Turner at 1:59 PM No comments: