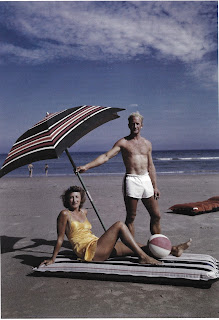 The January 2017 issue of Down East Magazine had an article “Ten Most Iconic Maine Photos of All Times” gleaned from 175 years’ worth of images.  Number 6 was taken by “our own” George Washington French and described him as Maine’s official Vacationland tourism photographer.  This is the image they chose, Ogunquit Beach, Maine, 1955.

George French was born Aug. 17, 1882 in Kezar Falls Village/Porter, Maine the son of John S. and Francena (Towle) French. In 1884 his parents moved to a small subsistence farm in Parsonsfield that remains in the family today - now the home of his daughter-in-law.

For most of his adult life George lived in New Jersey, returning to the old French homestead each summer until ill health prevented the trip two years before his death on August 2, 1970.


Although George’s family was very poor, he always had a thirst for knowledge and worked his way through school, graduating from Bates College in 1908.  He married Margaret Sears in 1911 and they had two children - Donald and Barbara.  Donald married a local girl, Madeline McAllister.

George loved sports and had keen interest in many things but his passion was always photography.  While still a young boy he bought his first camera from Sears Roebuck for $3.56 and pedaled his bicycle about the countryside taking pictures to sell for 15 cents.  In 1922 he turned to freelance photography full time.

George exhibited his pictures all over the world and won over 200 awards between 1916 and 1931 including the “Saturday Evening Post” and a medal from the Japan Photographic Salon in Tokyo.  In 1922 he developed his own line of Christmas cards with verses.

In 1936 the Maine Development Commission turned over all their Vacationland advertising photographic work to him which he did until retirement in 1955.  In 1943 his pictures started appearing on calendars, he did post cards in New Hampshire and Maine and color slides for commercial sales.


For many years he delivered stirring images, mostly black and white, of pastoral landscapes, contented hunters and anglers and cherubic kids at play.  But he was also a devoted chronicler of working people – on docks, on log drives, in farm fields and blueberry barrens. 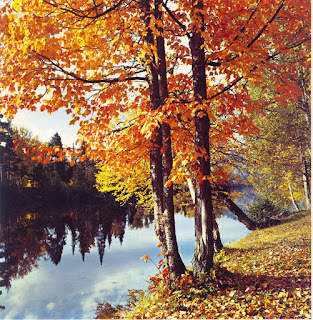 George became a charter member of the Parsonsfield Porter Historical Society, actively participated in all their events and documenting much of the local history.  After his death in 1970 his family donated all of his negatives and many prints to the Maine State Archives.  Copies of some of his pictures may be purchased from the Archives.
Posted by Patricia Turner at 6:07 AM No comments: