The Evolution of a Church-Part Three... This is the old church after it was transformed into the Garner Gym upstairs and the Fire House on the ground floor.  Mr. William Garner purchased the building in 1937 and remodeled the second floor for the gym and the lower part for the fire station.  It was presented to the town in time for basketball season in 1941.
Posted by Patricia Turner at 6:12 AM 1 comment:

The Evolution of a Church-Part Two... 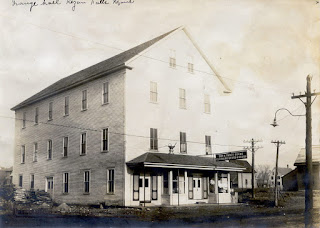 This is the old church building on River Street when the Charter Oak Grange owned it in 1908 and added another floor. Myron Ridlon started the first drug store here in 1910 and Frank Holmes had the dry goods store on the right. In 1924 it was ravaged by fire destroying the 3rd floor. Orman Stanley and Jim Wiggins purchased it and rebuilt it without the 3rd story.
Posted by Patricia Turner at 4:55 AM No comments:

The Evolution of a Church-Part One... 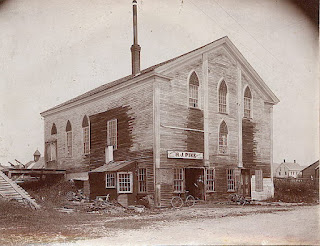 This building was formerly a Union church located between School and Bridge Street in Kezar Falls Village. The Kezar Falls Methodist Church  began using it in 1867.  This building was moved to this nearby River Street location and a new Methodist Church was built just back of this building’s former location in 1883.  One of the oldest buildings in town, it evolved over a period of years and was used for many purposes including a popular roller skating rink.  Dr. Chellis bought it in 1887 and made a large public hall called the “Village Hall”.

Posted by Patricia Turner at 11:13 AM No comments: