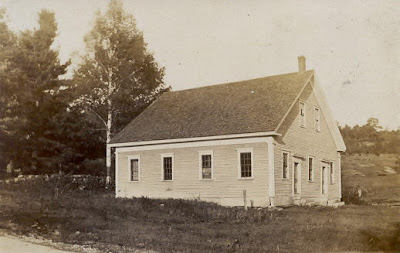 This picture, taken in 1938, is of the Town House at Middle Road Village located on the east side of Merrill Hill Road in Parsonsfield. The Town House was built in 1832 across from the Congregational Church when the town and the Church could no longer agree to share the church as a meeting house as they had been doing since 1790.  When the town was founded in 1785, Middle Road Village was a thriving community and the geographic center of the Town of Parsonsfield. In about 2002, a group of interested citizens called “ROOT” (Restore Our Old Town House), worked to restore the building to its original design and had it placed on the National Register of Historic Places in 2005.  Parsonsfield’s municipal offices were moved to Kezar Falls Village in 1985 but all residents south of North Road continued to vote at this location. In 2012 the municipal offices moved from the former Milliken School building in Kezar Falls to the former Fred Morrill School on North Road.  The Town House is not used at this time.
Posted by Patricia Turner at 6:20 AM No comments: 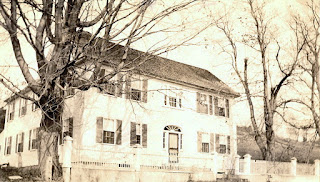 This is the “Old Dalton House” at Dalton’s Corner on Middle Road east of the McIntire house. This picture was taken in 1938 when it was owned by Joseph L. Marcionette of Medford, Mass.  It shows as the home of Mrs. A. Dalton on the 1872 map of Parsonsfield. By at least 1802, Samuel Dalton had a store close by. He was succeeded as proprietor by his brother Benjamin.  It is one of the few old homes that still stand at Middle Rd. Village.  For many years it was the summer home of Marcia and the late Arthur Close.  It is currently owned by Marcia Close.

Posted by Patricia Turner at 9:01 AM No comments: 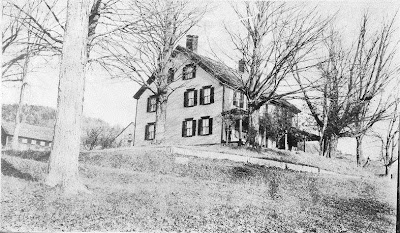 This house was located in Parsonsfield on Middle Road at the intersection of Merrill Hill Road (also called Dalton’s Corner).  This picture, taken in 1938, is of the Rufus McIntire house that was originally built for Rev. Benjamin Rolfe (the 1st settled Minister for the Congregational Church) in 1795.  It was the Weeman home in 1917.  Mr. McIntire also had a store near here.  The house and store no longer exist.   The Congregational Church records describe the house as follows: “40 feet long, 30 feet wide, 2 stories high with clapboards and shingles”.
Posted by Patricia Turner at 5:45 AM No comments: