Interior Views of Businesses in Kezar Falls, Maine - Part One 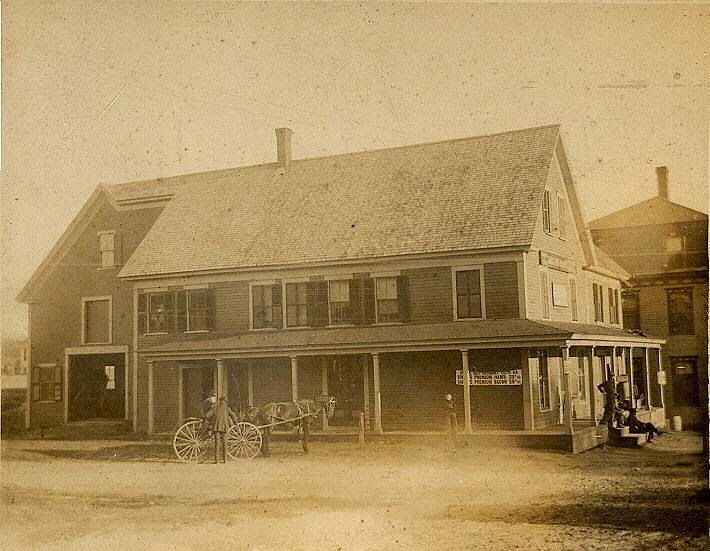 There are many exterior pictures of businesses of Kezar Falls in the collection at History House.  However, the few with interior views add an interesting dimension and better illustrate what those businesses  looked like at that time.  Here are two of them.

Ridlon Brothers Store
According to the 1880 map of Porter this store which is located at the corner of Bridge Street and River Street in Kezar Falls Village was E. T. Edgecomb’s dry goods and grain store.  Brothers Walter and Benjamin Ridlon bought it in 1904 and the family continued to run it until 1962.  The exterior picture was obviously an early view of the building.  The first interior view was circa 1930’s and the larger one was taken in the 1950’s.  Sometime in the 1950’s a fire destroyed the second floor but the building was repaired and continued.  Today it is occupied by The Village Laundry. 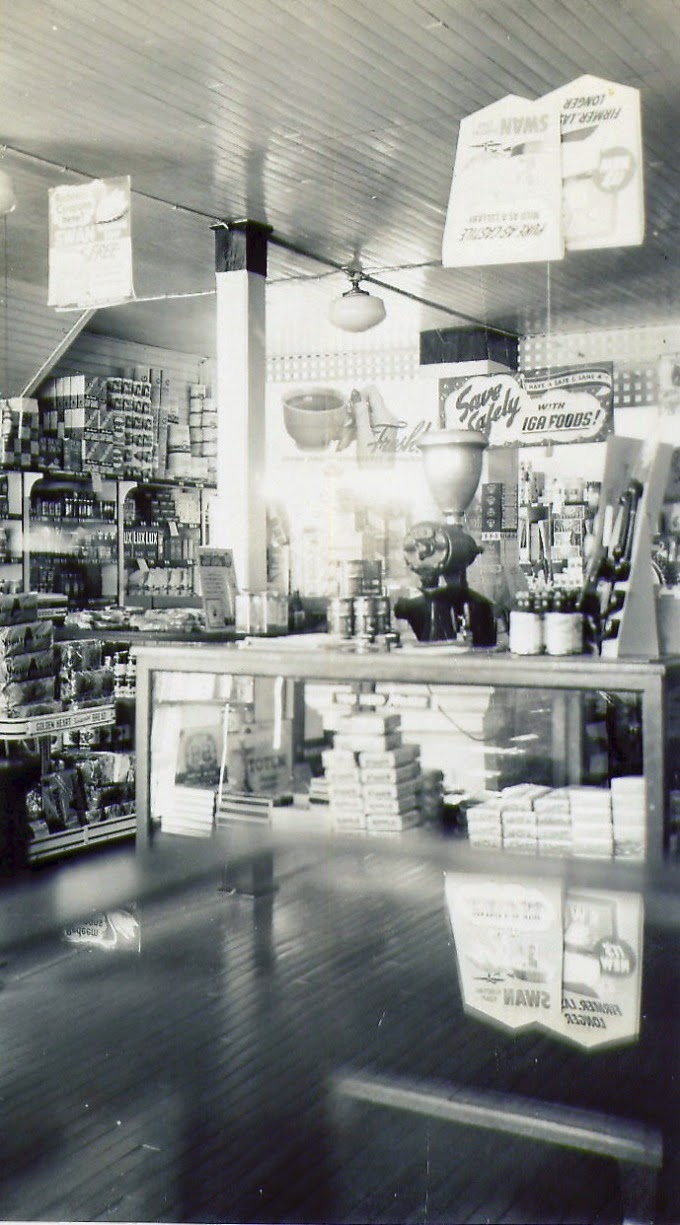 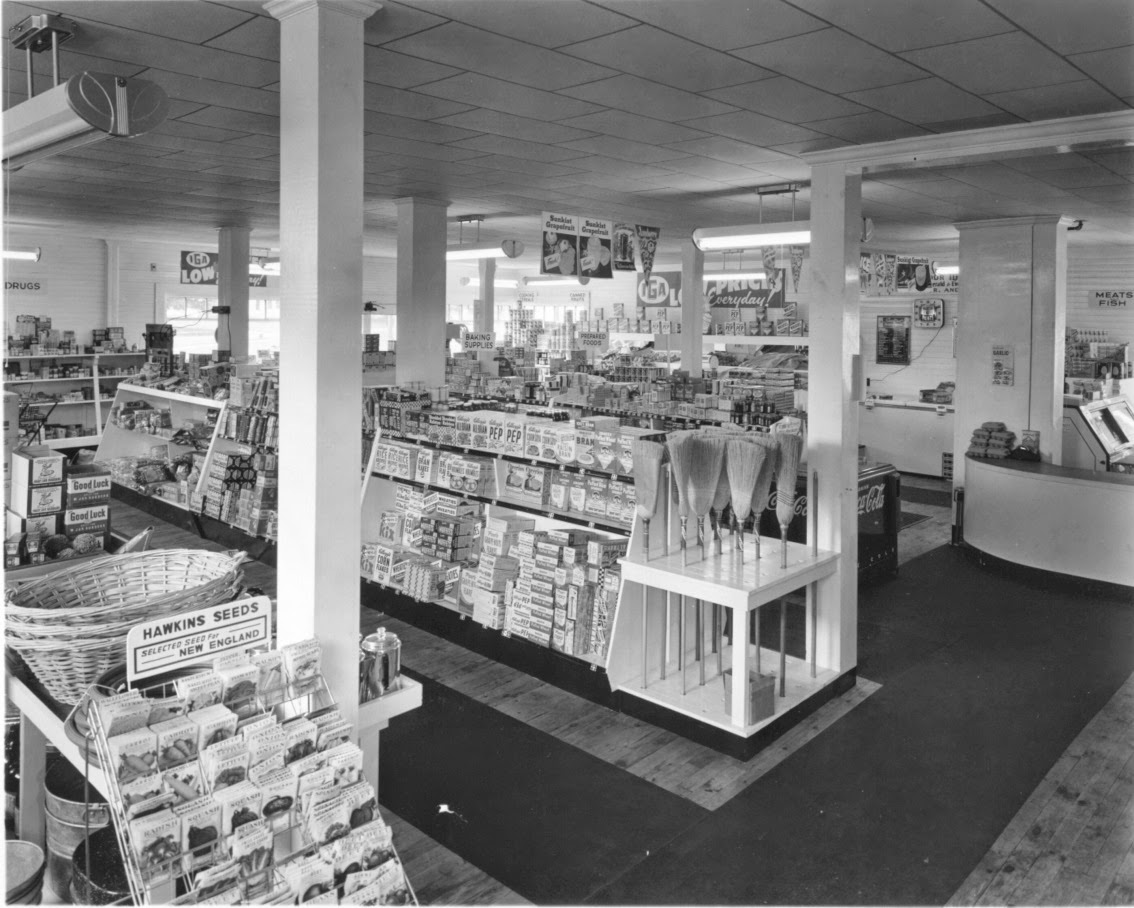 Myron Ridlon built his drug store in 1923 a short distance beyond the Ridlon Brothers store on Bridge Street.  It is still the last building before the bridge.  The pharmacy and ice cream parlor were on the first floor and there was an apartment upstairs.  “Ridlon’s Drugstore” operated until 1966.  In 1967 his nephew, Myron Locke re-opened the building as a variety store and snack bar that operated until 1977.  Later it housed a bakery, fabric shop and an addition was added with large windows overlooking the Ossipee River for a beauty shop.  Today it houses apartments and the beauty shop, “Riverside Reflections”.   The picture below circa 1930’s.

In this view of the drugstore, the soda fountain is on the left with tables for ice cream parlor patrons. The pharmacy is along the back and magazines and comic books were on the rack at the right. Typical drugstore toiletries were to the right beyond the magazine rack.  Myron Ridlon is shown here with his clerk, Iva Cutting.   This photograph is circa 1950. 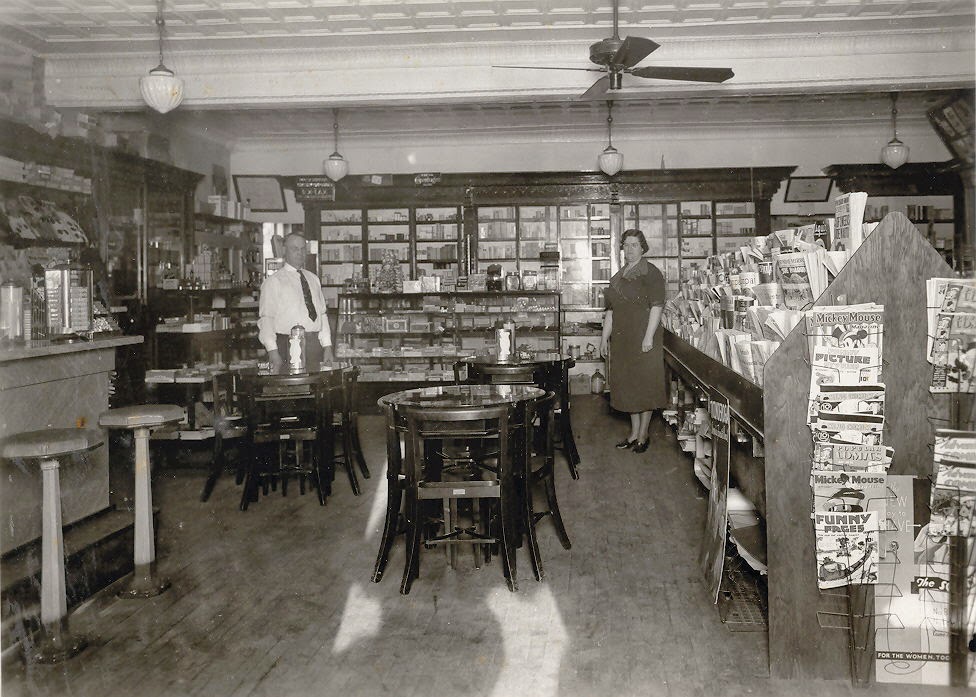 Posted by Patricia Turner at 7:13 AM No comments:

A Letter from Uncle Ted...


Jose W. Fenderson was born in Parsonsfield March 30, 1914 and died January 20, 2013 at the age of 98.  He was the only child of Frank D. and Laura (Jose) Fenderson.  Frank Fenderson was a well-known lawyer in the area.  Jose graduated from Hebron Academy, attended Cornell Law School and served in the U.S. Navy during World War II.  He passed the Maine Bar exam in 1941 and practiced law in Sanford for many years.  He never married.  The following letter from his Uncle Ted was sent to him March 18, 1925 when he was 11 years old.  It included these delightful drawings and reads as follows: 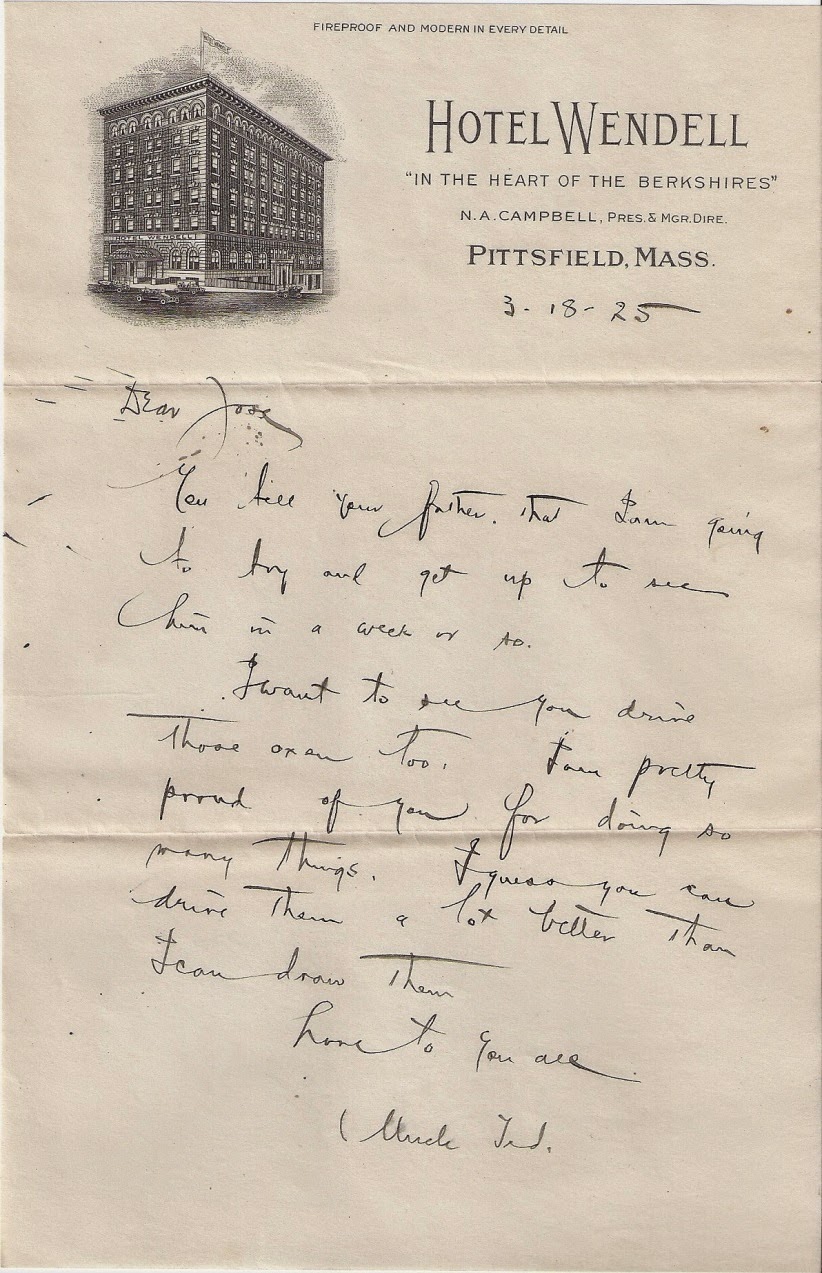 3-18-25
Dear Jose
You tell your father that I am going
to try and get up to see
him in a week or so.
I want to see you drive
those oxen too.  I am pretty
proud of you for doing so
many things.  I guess you can
drive them a lot better than
I can draw them.
Love to you all
Uncle Ted 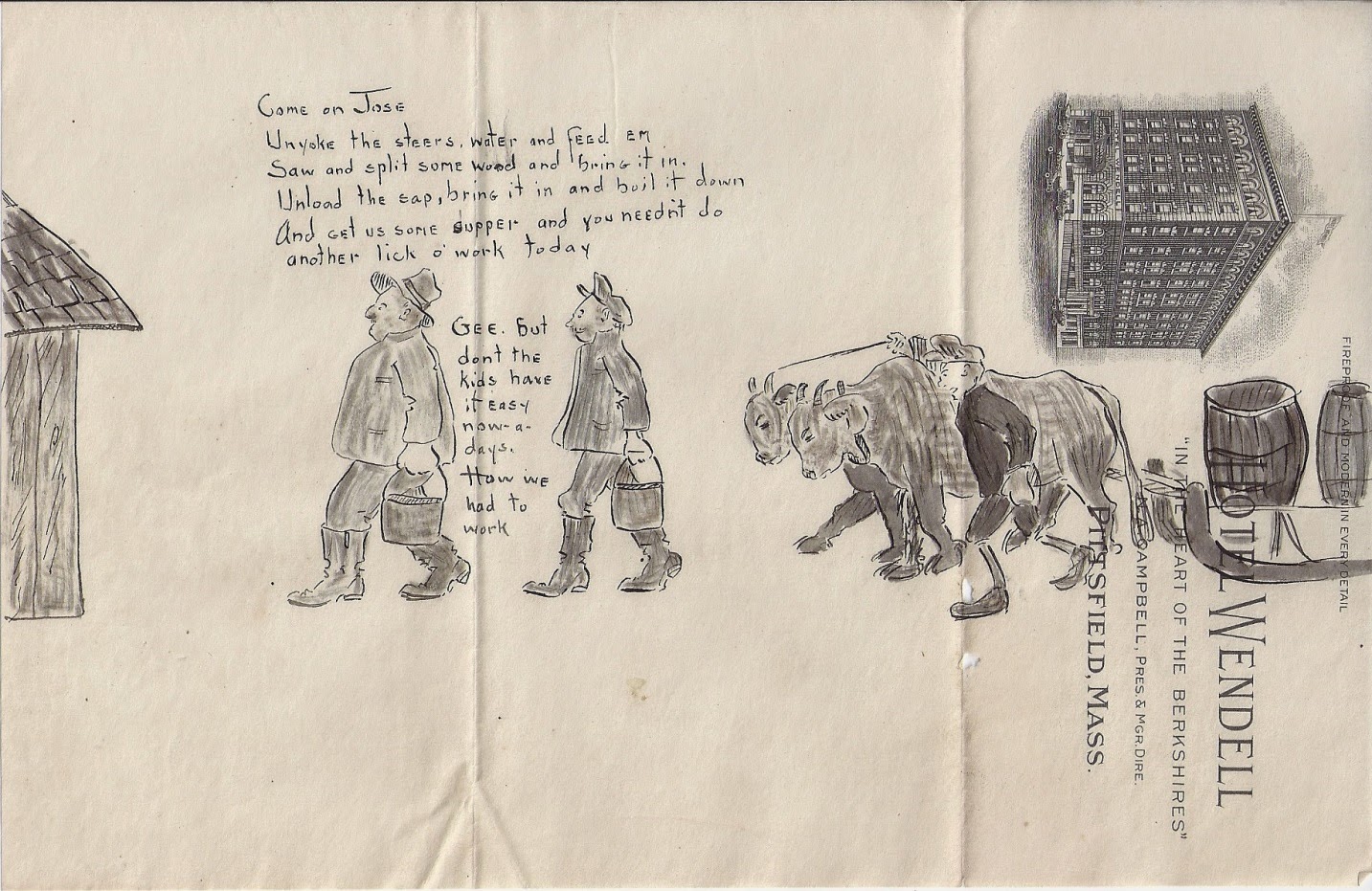 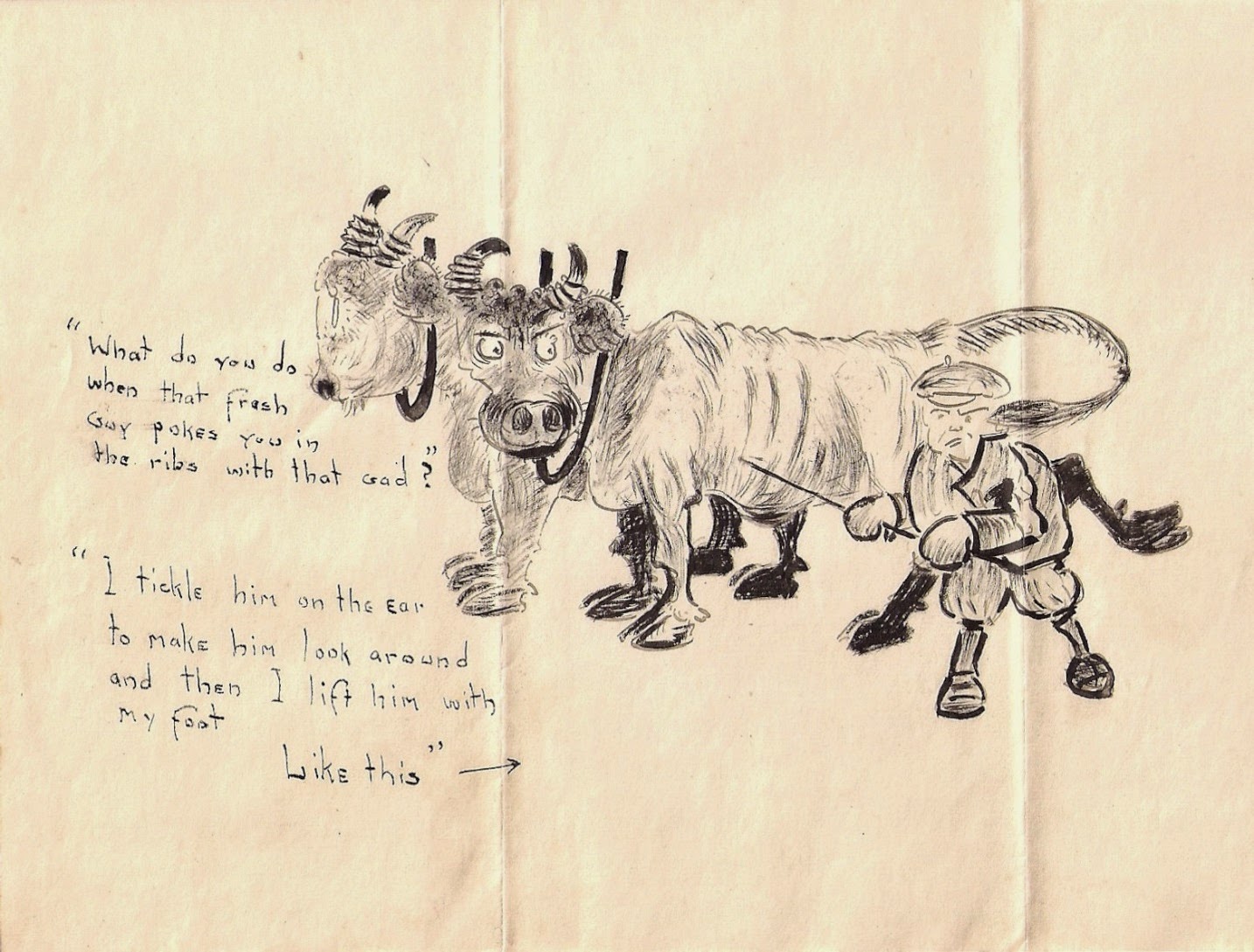 Posted by Patricia Turner at 12:50 PM No comments: