Parsonsfield and Porter - Young Towns in 1820


In 1820 when Maine gained statehood our towns of Parsonsfield and Porter were still very young towns. The History of Parsonsfield, published in 1888, tells us that on August 5, 1771 Thomas Parsons and his associates were deeded the tract of land now known as Parsonsfield by the heirs of Mrs. Bridgett Phillips, the land being part of that property conveyed to her husband, Major William Phillips by Chief Fluellen of the Sokokis or Saco Indians. As the conveyance to Major Phillips was disputed by the heirs of Francis Small and Major Nicholas Shapleigh who held title to the same land by deed of Captain Sandy, a lesser chief, Parsons also purchased the property from them on December 23, 1774 after having the land surveyed by Joseph Cram of Exeter, New Hampshire. The boundaries then established remain unchanged.
The plan of the township was divided into 12 ranges of 220 lots, the average being 150 acres each and a territory north of the 12th range along the Ossipee river of about ¾ mile wide, called the Gore. 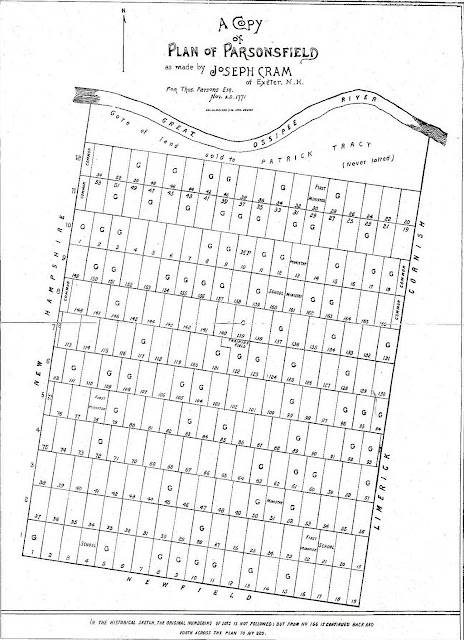 The deed to Parsons required him to settle 12 families from the last day of March following, each with a house eighteen feet square, and three acres of cleared land. He was to settle 40 families within 4 years and in 7 years erect and board a meeting house 30’ x 40’ and have a minister settled. The first settlers of Parsonsfield were:

1775 – Eben and John Moore, from Scarborough, settled in the southeast corner;

– John and Gideon Doe, from New Hampshire, settled in the west, near Province Lake;

1778 – George Kezar, who had hunted here as early as 1766, settled near Mudgett Meadow and on Kezar Mountain;

– Amos Blazo, from New Hampshire, settled in the northwest corner;

The town bypassed the usual step of organizing as a plantation and petitioned for incorporation which was granted by the state of Massachusetts, March 9 1785. 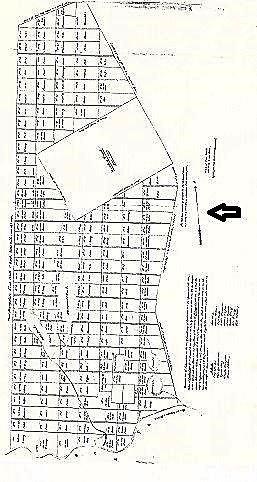 Porter’s earliest years began ten years later than Parsonsfield’s in 1781 a few weeks after the Battle of Yorktown, Virginia, (the final engagement of the Revolution War), when Meshach Libby traveled unaccompanied from Pittsfield, NH to the District of Maine to establish a home for himself and his kin. According to legend as related in the History of Porter by William Teg (1957) Meshach spent his first night near the falls where an Indian foot-bridge spanned the Ossipee River and in the morning made a “moose call” of birch bark which he blew, by some pre-arrangement, to summons none other than George Kezar who three years earlier had settled in Parsonsfield. Meshach and the great hunter/trapper spent several days roaming the pathless forests in search of a suitable place finally settling upon a spot about two miles north of what is now the village of Porter. There, on government land, Meshach decided to stay with a view to obtain title as soon as possible. After working to make a clearing and shelter Meshach returned to Pittsfield in December of that year, returning the following spring of 1782 accompanied by his wife and three of his four children. They were soon thereafter joined by Meshach’s parents, John Libby and wife, and his brother, Stephen. Next came Michael Floyd. These men were the first settlers, and since they had settled in Porter prior to the first day of January, 1784, they were entitled to receive one hundred acres of land each from the government. This right was recognized by Jeremiah Hill and his associates (including Dr. Aaron Porter of Biddeford who was the majority owner with six fifteenth shares of the plantation and for whom the town is named) who purchased the 18,600 acre tract, embodying the present town of Porter and the western section of the town of Brownfield, from the Commonwealth of Massachusetts on September 24, 1793. The “settlers deed”, however, to the four settlers was dated June 16, 1792. The arrow on the plan below indicates the approximate northern limits of Porter today.

The population of Porterfield so-called stood at about 280 people when “an act to incorporate a part of Porterfield into a town by the name of Porter, passed both branches of the Legislature of Massachusetts and was duly signed by Governor Caleb Strong on the 20th day of February, 1807”.

The 1820 federal census gives us a picture of what our towns of Parsonsfield and Porter, now joined by their shared village of Kezar Falls, looked like at the time Maine became a state. As the images below show Parsonsfield’s population in 1820 had increased to 2355 while Porter’s was still fairly low at 487. 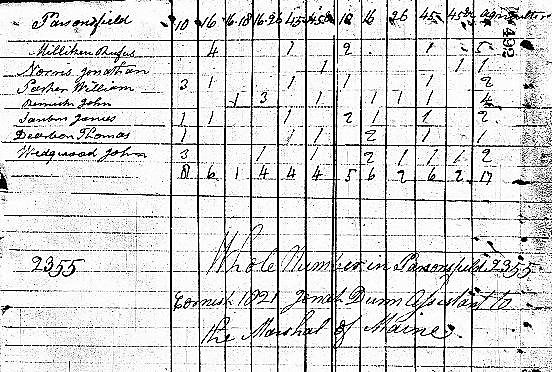 Who were these citizens of Parsonsfield and Porter who were present at statehood? Future blogs will explore some of their stories…

Posted by Patricia Turner at 10:57 AM