If we were told today that the last dollar of the United States National Debt was paid off and the surplus would be distributed to the states, we would be certain it was an April Fools Day joke.  However, in 1838 this did actually happen. 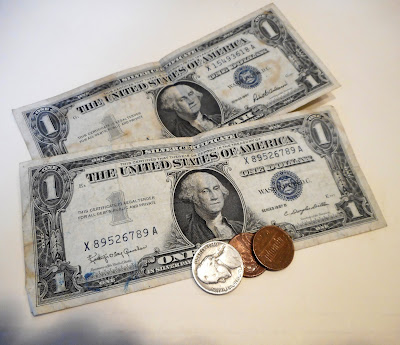 This is the story according to Thomas Moulton’s 1879 history of Porter.


During the last term of President Jackson’s administration the last dollar of our national debt was paid and a surplus remained in the United States treasury. This surplus was distributed by congress among the different states in proportion to population. Maine distributed her share among the different towns in the state in the same manner. Porter received, April 19 and May 1, 1837, $2,174.00. At several town meetings after its reception, the surplus revenue was a theme of much discussion. Various propositions for disposing of it were submitted to our voters. Finally, April 2 1838, it was voted “to distribute the town’s proportion of the surplus revenue as soon as may be.” This vote was carried into effect, and each inhabitant received $2.07.
Posted by Patricia Turner at 10:23 AM