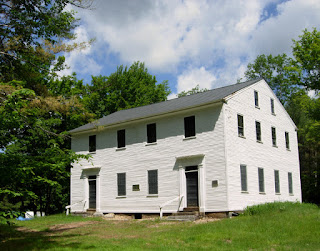 The Town of Porter is fortunate to own this unique historic building. This old meeting house, located on the Old Meeting House Road, was once the geographic center of the populated areas of Porter.  It was built by a small group of Free Will Baptists who were often called “Bullockites” after their minister - Elder Jeremiah Bullock.  The foundation was laid in 1819 and construction began in 1820.  It appears that by 1824 they lacked the money to complete the building and the Town of Porter voted on April 5, 1824 to raise $400 for the purpose of finishing the North Meeting House and to secure to the town the right to hold its meetings there.  Town meetings were held at the meeting house until 1911.  The “Bullockites” continued to hold quarterly meetings there for many years.
This very plain, unpretentious building has rectangular lines, with two entry doors on the south side with steps of large granite blocks. Just inside each door are two narrow enclosed stairways that wind up to the balcony.  There is no bell tower or steeple as the early worshipers believed it was not necessary to be “called” to worship.
There are 31 windows with 24 small square panes of glass each.  These are important because there is no electricity to illuminate the interior.  One large window with an arched top was placed behind the raised pulpit on the north wall.  The pulpit was taken down in 1881, probably to better serve the purpose of town meetings.  Parts of the pulpit were found in 1953 in a barn loft and it was restored and rededicated in 1969.
There are16 box pews on the main floor. These pews were sold with a deed for $50 each.  These were “pen like” affairs with benches on three sides around the interior. A gate leading into the aisle is on the fourth side fastened with a simple latch on the outside.    There is a balcony on three sides of the building which is 14 feet wide supported by 6 columns and has a sloping floor.  More box pews are located on the balcony. The balcony’s front rows were “free” bench seats and the front row in the rear balcony facing the pulpit were known as “singer seats”.
Originally there was no provision for heat but eventually a chimney was constructed and a wood stove installed near the pulpit.  The chimney has since been removed and the stove remains unused.
Today the building remains about the same as it was built with little adornment, plain pumpkin pine woodwork and white plaster walls.

From 1947 through 2011 the Parsonsfield-Porter Historical Society held a yearly worship service at the Meeting House on Labor Day Sunday. Today there is simply an Open House on that date and everyone is invited to come and see this wonderful building.  Although it is owned and maintained by the Town of Porter, the Parsonsfield-Porter Historical Society continues to be custodian of the building to ensure it is taken care of for future generations to experience and enjoy.  Most of our citizens appreciate the value of this building and its place in our history and money is set aside each year at Town Meeting to maintain it.  In 1973 it was placed on the National Register of Historic Places. Tours may be arranged by appointment by contacting the Parsonsfield-Porter Historical Society.


A reminder to all members, if you would like to attend the PPHS annual Thanksgiving luncheon on Saturday, November 12, 2016  at 1 pm at the Porter Town Offices you need to call Jan Iler at 625-7019 to reserve your place.  The luncheon is for members and their guests only.
Posted by Patricia Turner at 7:29 AM