LOOKING BACK AT WINTER SCENES OF THE PAST

Although 2023 has started off as a very mild winter, that is not usual for Kezar Falls and the surrounding area.  Let’s look at some old-fashioned Maine winter scenes from years past. 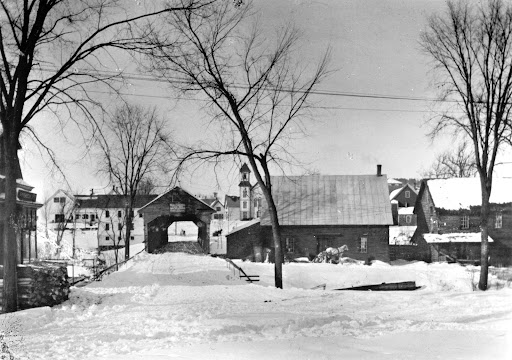 This is Kezar Falls from the Parsonsfield side of the river looking through the covered bridge with the Merrifield bobbin mill on the right, Frank Holmes store is left of the bridge on the Porter side and the Methodist church is in the background.  Each town “snowed” the road inside the bridge to keep it passable for sleighs.  The roads were rolled to pack down the snow instead of plowing in those days. This scene shows the snow being rolled on Kezar Mountain Road to pack it down so it would be passable. 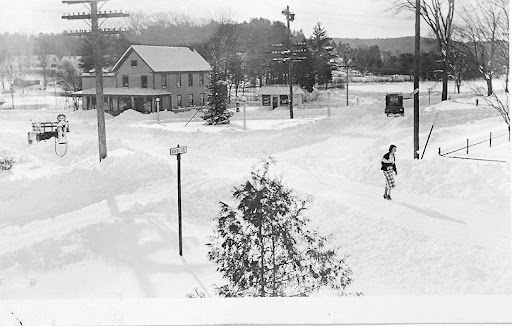 This last picture is how I remember winter as a child growing up in Kezar Falls. In fact, there was often much more snow than in any of these pictures.

As 2022 passes into history we welcome 2023, a brand-new year full of promise and hope. 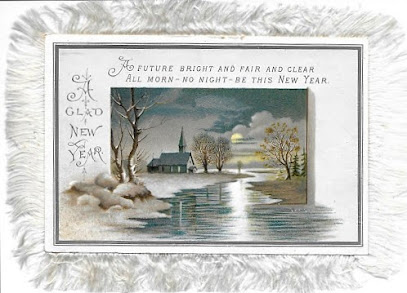 With this vintage New Years Day card, the
Parsonsfield-Porter Historical Society wishes
HAPPY NEW YEAR to all of you!
We look forward to seeing you in the spring of 2023.

The 2022 Holiday Season has arrived.  It has been a good year and now History House is closed for the winter.  So, let’s all enjoy the season.

Many holiday events were held in the area the weekend of Dec. 3 & 4.  Among them was the Parsonsfield Seminary’s 2nd Annual Festival of Trees at the dormitory building in Parsonsfield.  This very appropriate Victorian era setting was decked out with wonderful Christmas decorations and trees of various themes done by several individuals and organizations.

Although our Society did not decorate a tree for the event this year, several of us enjoyed seeing the contributions of those who did.  We want to show you those done by the 21 Club of Kezar Falls, a local women’s club, and the Kezar Falls Circulating Library as well as a small one done by our VP, Lyn Sudlow. 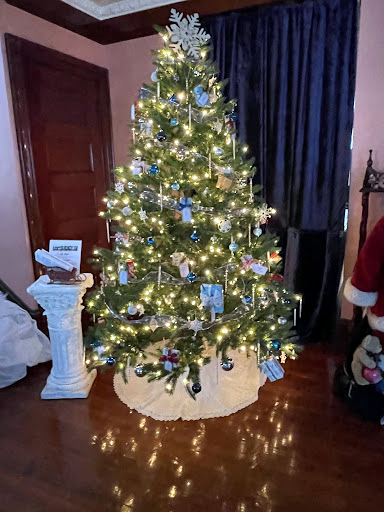 The 21 Club’s tree with package ornaments representing 21 ways they have made a difference in our community. 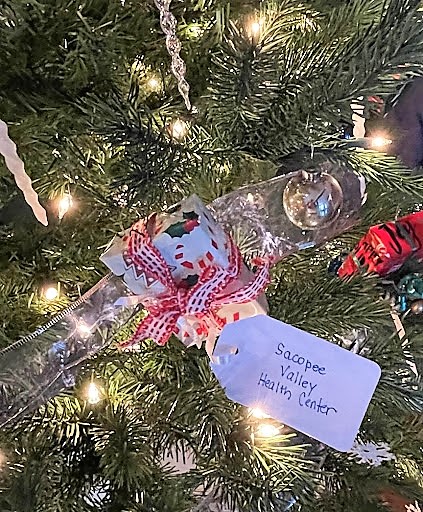 Kezar Falls Circulating Library’s theme was favorite books by Maine authors and can be seen in the library during the holiday season. 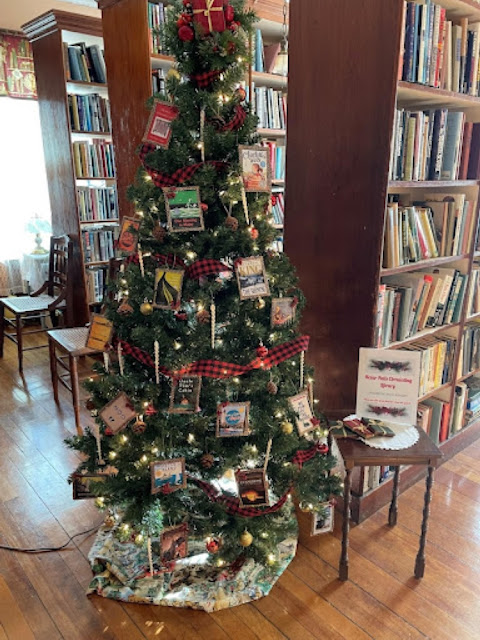 Lyn Sudlow’s was small and whimsical with a kitty climbing the tree. 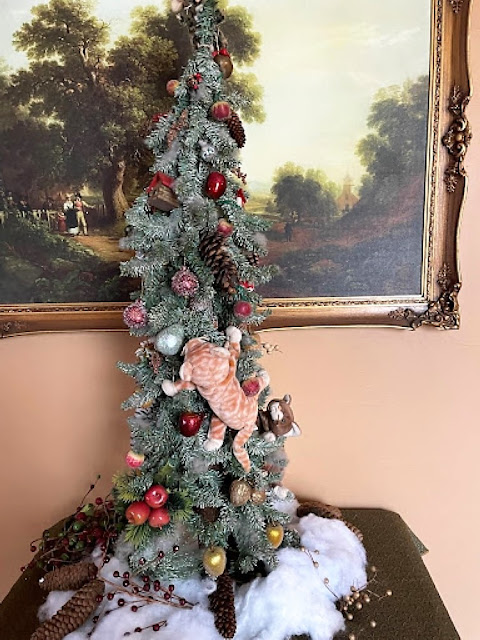 BEST WISHES TO ALL OUR MEMBERS AND FRIENDS.

Today we put the spotlight on a long time resident of Kezar Falls known for his work with young people.

Sidney Owen Griffith was born in Harrisville, RI on June 14, 1889 to Charles and Emma Griffith.  He attended Burleighville High School there.  He first came to know Maine when he attended Bliss Business College in Lewiston. He lived in Somerville, MA for 13 years and later in Medford, MA and was employed as New England Manager in Boston for the Whitlock Cordage & Twine Co.

He married Blanche Ridlon in Somerville in 1913.  She was born in Kezar Falls the daughter of Frank and Luella Ridlon.  She graduated from Porter High School in 1911 after which her family moved to Saugus, MA. The Griffiths returned to Kezar Falls in 1933 and he was employed by the Kezar Falls Woolen Mill as a “percher” in the weave room for 28 years.

Owen Griffith was always interested in the youth of the community.  He gave much time over the years to coaching high school dramatics, as well as other local groups presenting plays and minstrel shows.  He coached more than 100 Porter High School students in junior prize speaking.  Many of them took top honors in the 25 years he devoted to working with young people in dramatics.

He taught Junior Members of Christian Service of the Riverside Methodist Church where he was a member for 29 years.   He also managed local baseball teams and scored every Little League game for 14 years. He still had time for hobbies including hunting, fishing and had a large tropical seashell collection gathered while wintering in Florida.

The Parsonsfield-Porter Historical Society sends wishes to everyone for a Happy Thanksgiving. 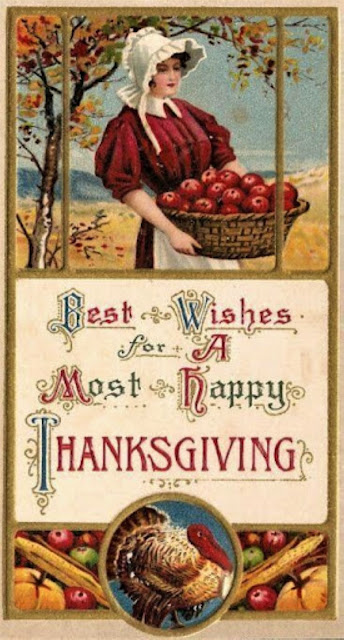 Once again it is time to close History House for the winter after an active season of meetings and events.   However, this BLOG will continue, and we will reply to requests for information although our resources will be more limited when History House is not accessible.   And we accept new members all year.

You can contact us through our Web Site: www.parsonsfieldporterhistorical.org

or our e-mail address: pphs@parsonsfieldporterhistorical.org

Planning for 2023 meetings, programs and events will begin early next year.  If you have ideas for a program or for exhibits, please let us know.  We welcome your input.

Our next newsletter will be out next April with what to expect for PPHS activities in 2023.

Once again, we return to featuring a local citizen who has been prominent in the history of our towns. This time the spotlight is on: CHARLES GARNER FOX.

Charles Garner Fox was born in Lewiston, June 12, 1893, son of Charles T. and Alice (Garner) Fox.  He attended local schools and graduated from Parsonsfield Seminary in 1911.  He also graduated from the Philadelphia Textile Institute.  He was employed by the Kezar Falls Woolen Company for a short time and then became Assistant Superintendent of M. T. Stevens Woolen Company in Haverhill, Massachusetts where he remained for three years. 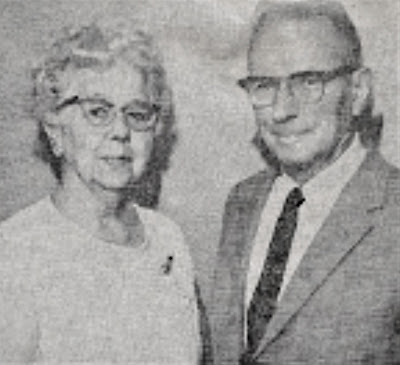 He married the former Gertrude Wentworth of Parsonsfield in 1915.  They returned to Kezar Falls and he became associated with his brother, Carleton T. Fox in the manufacture of wood bobbins for the textile industry.  The Glen Bobbin Company in South Hiram was organized in 1918 as an owner-operated company that was incorporated in 1919 and employed 20 to 25 people.

Photo of Charles and Gertrude in 1965.

Charles and Gertrude resided for 15 years in the house on Glen Street, South Hiram near the bobbin mill.  While a resident of South Hiram he served on the Hiram Board of Selectmen.  They returned to Kezar Falls purchasing a home on Elm Street, on the Parsonsfield side of Kezar Falls and he served several years as selectman of Parsonsfield.

Charles retired from the bobbin mill business in January 1957 and sold his shares to his brother, Carleton.  The business continued to operate until October 1959. 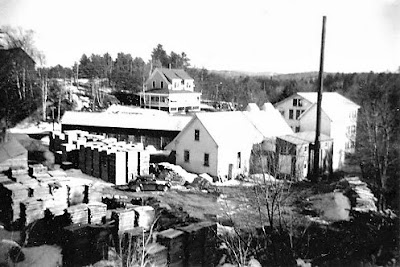 Gertrude and Charles had two daughters: Constance who died young in 1936 and Mavis who married Carlton McDonald – commander of the U.S. Grant nuclear submarine (in 1965) and they had 4 children.

Charles had many interests.  He was an avid sportsman and played baseball and basketball while in school and played for the Kezar Falls baseball team for many years.  He was skilled at woodworking and made many pieces of furniture for himself, his family and various community projects.  After retirement he became interested in tree farming and had a 500-acre tree farm in Parsonsfield.

Charles died March 31, 1970, after a long illness and is buried at the Kezar Falls Burial Grounds.

A free program and book signing will follow the meeting at about 2:30 pm presented by Ron Romano.  Both of his books may be purchased at this time.

A unique form of grave marker was produced in New England in the mid-1800s.  Consisting of large stone slabs usually held aloft by granite posts, these monuments resemble signboards and have been named “billboard monuments” by cemetery historian and author Ron Romano.

Rare and often overlooked, only 42 have been discovered in Maine --- one of the most unique of which is in Parsonsfield. Ron’s research into this intriguing form of grave marker led to his 2020 book “Billboard Monuments of Maine” which featured the 38 monuments known in the state at the time. Readers of the book then found four more in the state. In 2021, Ron expanded his search for these interesting monuments beyond Maine, ultimately discovering four in New Hampshire and 27 in Vermont. All of the newly-discovered ones are featured in his new book, “Curious Gravestones in Northern New England: Billboard Monuments, Volume II.” In a presentation rich with images and stories of the people these monuments memorialize, Ron presents his original research into this unique monument form, discussing the origin, construction features, dates of production, and makers.

Ron Romano is author of four-cemetery and gravestone-themed books. He’s designed tours for more than a dozen historic cemeteries in southern Maine. He is an officer on the board of the Association of Gravestone Studies, the leading organization in America for cemetery and gravestone studies, and he serves locally on the board of friends of Portland’s oldest burying ground, Eastern Cemetery (established in 1668).